(The following information is taken from the application for the Vitalizing Democracy Prize 2010.)
Problem and objective
To establish Wisdom Councils is an inherent part of transforming the political decision-making process. The Office for Future-Related Issues has initiated at least 25 Wisdom Councils in the State of Vorarlberg. Moreover, the Office has started a research project by the European Institute of Public Participation to promote further distribution and evaluation. 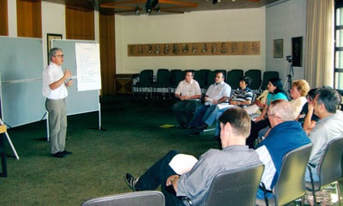 Structure and process
Although the basic design of the Wisdom Council is flexible and can, according to its application, be adapted to the existing structures and general conditions, the Wisdom Council process is basically three steps.
Present and further development
Since 2006, many Wisdom Councils have been realized in Vorarlberg. For the most part, the public participation process took place in municipalities and cities. In Bregenz, for example, Vorarlberg’s state capital, 5 Wisdom Councils were initiated within 2 years. The participants differed from Council to Council. Amongst others, concrete urban development projects have been discussed. The results met public response and were integrated into further planning (overall concept “Bregenz 2020”.

In 2010, the Office for Future-Related Issues has started, in cooperation with the Austrian Federal Ministry of Agriculture, Forestry, Environment and Water Management (Lebensministerium), a nationwide research project, intended to run for 2 years, to evaluate and advance the participation process. In a first step, about 40 facilitators have been trained in Dynamic Facilitation. The so formed “community of practice” organizes Wisdom Councils to questions concerning Vorarlberg and beyond. Those applications are part of the accompanying research, done by an interdisciplinary research team (“Kairos- impact research and development gGmbH” and the “European Institute for Public Participation”).
​Impact
Although the Wisdom Council has neither the authority to decide nor the rights of co-determination, it works well in a municipality. The presentation of considerations and suggestions in public makes people become aware of challenges and essential developments. In Bregenz, for example, the Wisdom Councils were incorporated into an overall concept process called “Bregenz 2020”. The results of the statements elaborated in the Wisdom Councils, as well as the most important points of the discussion (Citizen-Café), were integrated directly into the overall process. Civic participation has become a cornerstone of the decision-making process of the City.
Detailed Information
Broader context
Doing Wisdom Councils is part of a package of measures to promote public participation, offered by the Office for Future-Related Issues, on behalf of the State Government of Vorarlberg. The overall strategic concept is defined in the position paper “participation”. The manual “Handbuch Bürgerbeteiligung” offers guidance for the state and the municipalities and a specially developed training supports civil servants on a local and regional level to carry out participation processes.
Type of contribution by participants
They determined the outcomes of the project
Target group
The Wisdom Council practice has shown that citizens are not used to being involved that intensive in a development process. They are astonished and surprised, but at the same time pleased, because their views and opinions are asked for. This expresses acceptance and appreciation. The wisdom councils are spending 1½ days voluntarily and unpaid (!) to discuss their living environment with mostly unknown people. This shows personal commitment and the willingness to get involved. During the Wisdom Council, people participate actively and on the discussion, they are doing a high quality job. Working on a common concern creates a strong cohesion within the group. Feedback has shown that the major part of the people involved is amazed about the participation and is motivated to work on in self-organized initiatives.
​
The target group depends on the specific topic the Wisdom Council is dealing with, the setting or the region where it is held and is, therefore, redefined each time. Important for the selection is a clear, transparent and, as possible, objective method. The selection by the population register has proved to be effective. A diverse composition, which is defined by sociodemographic data (age, sex, profession, education, migration history) is significant. The “rate of return”, or rather the percentage of subsequent registration, comes up to approx. 10-15%
Total number of people addressed by the project (approx.)
Approximately 140 people are invited per Wisdom Council. The Citizen-Café is attended by, about 30-80 people. Along with that, the broad public is informed via local and regional media. All in all, the Wisdom Councils in Vorarlberg brought about the interaction between approximately 3000 people.
Total number of active participants (approx.)
Around 160 people have attended 13 Wisdom-Councils, which means about 12 participants got involved per Wisdom-Council.
Specific effort made to include disadvantaged groups
Some effort to address disadvantaged groups

The random selection guarantees that also people are addressed who have not had the possibility to participate actively so far. If no young persons or people with migrant history respond to the invitation, we try to mobilize them by inviting (via telephone) exactly those demographic groups.
Adoption by others
In some cases
Costs
The average cost per Wisdom Council amounts to € 7,500. As a result, the total amount of money invested in the 13 Wisdom Councils in Vorarlberg so far, is around € 98,000. The larger part of the sum is financed by the municipalities and by the organizers. Additionally, the Office of Future-Related Issues has offered financial support in case of extraordinary expenditure. The total cost of the research project is € 182,000 and is made up of: Part 1: Instruction of approx. 40 facilitators approx. € 40,000 Part 2: Realization of about 20 Wisdom Councils approx. € 100,000 Part 3: Scientific evaluation (Lebensministerium) approx. € 42,000 Total costs approx. € 182,000 From which the State of Vorarlberg has to finance approx. € 17,000 The costs resulting from the realization of local and regional Wisdom Councils should be accepted by the municipalities and their supporters.
Please Donate to the Center for Wise Democracy! ... All donations are tax-deductible. We are a 501-c3 organization.
Center for Wise Democracy