The Creative Insight Council is a form of the Wisdom Council Process modified to improve the existing system more than to transform it. So the group might not really be chosen at random ... or it's only a one-time event instead of an ongoing process ... or where the group presents its results to management rather than the whole system of people. At one time we thought that it was a CIC if the group was given the topic. But no. This does not detract from the transformational potential of the Wisdom Council Process.
Example #1
The CIC involves a randomly selecting twelve or so people to address some difficult issue. The process is short, maybe just two days. In the first portion it may be that the CIC hears from different sides of the issue, stakeholders or experts. Then they are sequestered for a short time with someone skilled in Dynamic Facilitation, where the group reframes the issue and determines a unanimous perspective. Then in a public ceremony, they present their conclusion and the story of how they achieved this conclusion back to the public.

The usual response from the community and leaders is basically, "Yes, I think so too." So the process both builds a shared perspective on the issue and more creative public conversation. It might be valuable to repeat the process for three or four times on the same topic so the shared perspective can evolve forward. Also between sessions it’s often best if government leaders and stakeholders meet to craft a coordinated response.

Example #2: The city of Bregenz Austria used a CIC to circumvent the usual partisan battle over developing its downtown. A random citizen group met with developers and city leaders and were then dynamically facilitated to determine an unanimous perspective. They reframed the issue to be "how to link the City to the Lake." Then they suggested a way to do it, by raising the base level of the proposed project from the ground to the second floor, which would allow citizens to walk over the highway and railroad tracks and then down to the lake. It was a win/win proposal now being implemented ... without the usual battles. 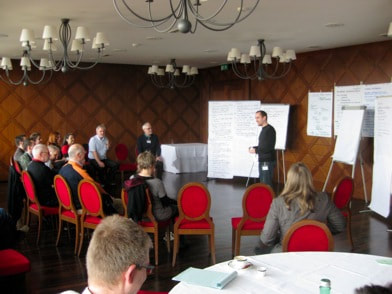